An eyelid lesion is a pathological change in the tissue of the eyelid. There are many types of lesions, most of which are benign or harmless. However, some lesions may be malignant or cancerous and require careful biopsy and sometimes referral to a dermatologic specialist.

An eyelid lesion may be pigmented or colored. These range from relatively common disorders such as styes or chalazia, which are small red bumps on our eyelids to other types of benign eyelid lesions including  seborrheic keratoses, papillomas, nevi, hemangiomas, actinic keratosis and xanthelasmas.

The 3 most common types of cancerous lesions of the eyelid are basal cell carcinomas (BCC), Squamous cell carcinomas (SCC) and malignant melanomas. If your ophthalmologist suspects a lesion could be cancerous he may recommend excisional biopsy. If a cancer is confirmed by biopsy it usually results in a referral to dermatologic specialist familiar with Mohs surgery which is a tissue sparing procedure that can more completely remove the cancer while sparing as much eyelid/facial tissue as possible.

How Are Eyelid Lesions Detected?

How Are Eyelid Lesions Treated?

In most cases, benign eyelid lesions require no treatment. However, the lesion can be surgically removed from the eyelid for cosmetic reasons, if it interferes with your vision, or if your doctor sees anything abnormal. Any lesion that is surgically removed will normally be sent for biopsy.

During a surgical excision of an eyelid lesion, you will feel little or no discomfort. On the day of treatment, a staff member will welcome you. The staff will help you prepare for your surgery by putting eye drops in your eye.

An anesthetic injection is given around the eye to prevent discomfort during the removal process. A driver may be recommended. The procedure normally takes less than 30 minutes. Typically, no eye patch is needed after the surgery.

Your eye may appear to be slightly bruised and swollen following the surgery. However, this should not cause significant discomfort. Your surgeon will follow your progress to monitor for signs of inflammation and infection.

Some potential complications from surgery include the risk of bleeding, infection and hematoma, which can usually be successfully treated.

Seborrheic keratoses (SK) are a common type of benign tumor and are associated with aging. SKs can occur anywhere on the body, including the eyelids, and can range in color from light tan to dark brown or black. Once you have one SK, you are likely to develop more of them. These growths, which look like they’re stuck onto the surface of your skin, are usually uneven in texture, and can be very itchy. Scratching them can cause bleeding and can also lead to a skin infection. Normally treatment of SKs is not necessary.  However, an SK can be surgically removed from the eyelid for cosmetic reasons, if it interferes with your vision, or if your doctor sees anything abnormal. When an SK is removed, the tissue is usually sent for a biopsy for precautionary reasons.

A papilloma is smooth, round benign tumor that originates in the outer layer of skin on your eyelid. It is also called a squamous papilloma. This type of lesion is a common type of benign eyelid tumor and is associated with aging. This type of papilloma is commonly called a “skin tag” when located on other parts of your body.

In some cases, a papilloma can be caused by a viral infection and are known as “viral warts”. Viral papillomas are more common in children and teenagers. They can have a fleshy, lobular appearance like cauliflower. They also can continue to grow larger.

Eyelid papillomas rarely require removal for medical reasons. They can easily be removed in an outpatient procedure if necessary for cosmetic purposes of if they interfere with vision.

A nevus is a benign neoplasm made up of overgrowth of melanocytes.  In other words, it can be described as a mole. A nevus can be present at birth but may also develop after birth, usually appearing in parts of the body exposed to sunlight. Normally moles on your eyelids would not be removed for medical reasons unless they interfere with your vision. However, if you notice changes in the shape of your moles, if they become painful, itchy or bleed, they should be removed and subjected to a biopsy to rule out melanomas.

Hemangioma is a benign tumor of the endothelial cells that line blood vessels. This type of tumor appears shortly after birth or in infancy and grows rapidly for an initial period of time. Then, the tumor will gradually become smaller and usually resolve itself by the time the child reaches age 7. However, if this growth is situated near your child’s eye, it can have a serious impact on his or her vision and it is highly recommended that you seek out an ophthalmologist to evaluate it.

Actinic keratosis (AK) is a scaly white patch that forms on the surface of your skin, usually in areas exposed to sunlight. Although AKs are benign, they are also considered to be pre-cancerous lesions. If you have an AK on your eyelid, our surgeons can remove it and send a sample of the t issue to a pathologist for biopsy. If cancer is found a recommendation to a dermatologic specialist  for a more complete resection may be deemed necessary.

Xanthelasma are lesions of yellow plaque on the eyelids. They can be soft, semi-solid or hard and have a tendency to spread and to become permanent. They occur frequently in people with elevated cholesterol levels and / or reduced levels of HDL, the “good” cholesterol. Xanthelasma can also be associated with uncontrolled diabetes. Although these lesions are benign, they may be unsightly and patients often want them removed for cosmetic reasons. If you have xanthelasma, the usual treatment is surgical removal, which can be performed in the office. There is a small chance of recurrence, especially in those with cholesterol abnormality. 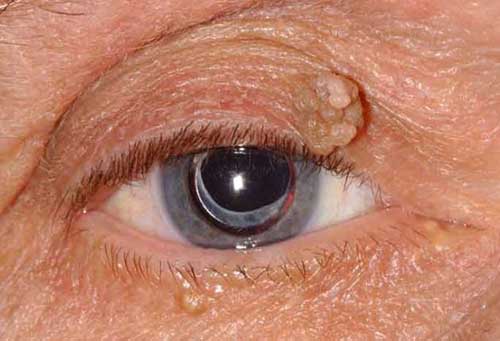 Experience You Can See

Dr. Jonathan Carrere is a board certified ophthalmologist, and specializes in the medical and surgical treatment of cataract, glaucoma, eyelid disease, and laser refractive surgery. Dr. Carrere completed his undergraduate education at Centenary College of Louisiana and his medical school training at LSU Health Science Center in Shreveport, LA. After graduating summa cum laude in undergraduate and medical school, he went on to complete his ophthalmology residency at the University of Mississippi Medical Center in Jackson, MS, where he served as Chief Resident during his senior year of training. At that time, he developed both a clinical and research interest in oculoplastic surgery, and is a published author in leading oculoplastic and reconstructive surgery journals. Dr. Carrere is an active member of the American Academy of Ophthalmology and the American Society of Cataract and Refractive Surgery.

Lona Naquin is the LASIK and Cataract Coordinator at Advanced Eye Institute. As a Certified Ophthalmic Technician, Lona has specialty training in premium lens options and is well versed with our FEMTO laser for laser cataract surgery. She is proficient in the latest advancements of Intralase LASIK. Lona is originally from Thibodaux and has been part of the Advanced Eye Institute Team for 20 years.

Lauren is from Houma and graduated from Nicholls State University in 2004. She has been a Registered Nurse for 15 years. She has hospital experience in both nursing and case management roles, as well as, 6 years Director of Nursing experience at a local nursing home. Lauren has been the Director of Nursing at Thibodaux Laser and Surgery Center since September 2015

Renee Prejean is the Financial Manager for Advanced Eye Institute. Renee has been the in the Medical Business Administration field for 34 years. During this time, she has served as Medical Practice Administrator for over 25 years. These experiences developed into her personal consulting company providing administrative support and medical billing services for a variety of medical practice specialties. These services are what introduced Renee to Advanced Eye Institute 2 years ago, where she has transitioned into joining our team.

Dr. Arora is the area’s only full time, fellowship trained Retina specialist who we are proud to partner with for our patients’ retina care. He is available in our Thibodaux office to see patients several times per month. He also has a busy retina practice in Houma where he is able to offer the full gambit of retinal treatment options for patients. Dr. Arora is the first surgeon to bring Retinal surgery to the Bayou Region. Patients previously were forced to travel to New Orleans or Baton Rouge for these surgical/medical treatments. He specializes in the treatment of macular degeneration, diabetic retinopathy, retinal detachment, ocular trauma, and other retinal diseases.

Dr. Eustis is Pediatric Ophthalmologist and a fellow of the American Academy of Ophthalmology. He has been on staff at Ochsner since 1986. A well-known pediatric ophthalmologist, he has over 35 scientific publications and over 70 presentations to his credit. Dr. Eustis holds Clinical Associate Professorships in ophthalmology at LSU medical school. Dr. Eustis visits the Advanced Eye Institute Houma office twice per month to see our pediatric patients locally.

Dr. Darby Chiasson is an Optometrist from Advanced Eye Institute in Cut Off. He is a native of Cut Off and takes time away from his bustling practice to join AEI a few days per month to provide general eye exams, contact lens fittings and refractions for glasses. He has been a valued team member for over 20 years and patients love his friendly, hometown approach to patient care. He is proud to serve the patients of the tri-parish area and to work with the skilled surgeons at AEI to provide the best care for his patients both up and down the bayou region.

Dr. Arceneaux is a native of south Louisiana and is originally from Covington, LA where he attended St. Paul’s High school. He later went on to enroll in college at the University of Southern Mississippi where he graduated Summa Cum Laude followed by graduate studies at Tulane University where he earned his Master of Science degree. Following his graduate school education, Dr. Arceneaux chose to attend Louisiana State University Health Sciences Center medical school in New Orleans. His residency training was completed at the University of Alabama at Birmingham at the internationally renowned UAB Callahan Eye Hospital where he served as chief resident in his senior year. Dr. Arceneaux is a Board-Certified Comprehensive Ophthalmologist and specializes in cataract, LASIK, and glaucoma surgery as well as many other procedures in and around the eye. He takes great pride in caring for each and every patients’ individual needs. Dr. Arceneaux believes it is important to examine the whole eye and the whole patient as there are often systemic diseases manifesting as visual problems. He is dedicated to keeping up with the latest ophthalmologic advancements, in both surgical techniques and medical care. He is an extremely skilled surgeon and he is the kind of physician that listens whole heartedly and wants to connect with patients. He is passionate about providing the best possible eye care for the people in our community.